A Twins DNA test allows to check whether two twins were born from the same egg (mono-zygotic) or if they are born of two separate eggs (zygotic). A twin DNA test is also known zygosity test.

Why a twins DNA test? 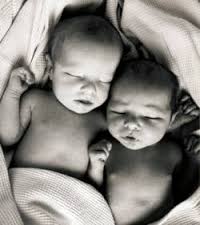 In most cases, the parents or the twins are taking this test out of curiosity. Doctors use this test when there is a specific need to know if one of the twins could be a potential donor of blood or organs.

True twins: mono zygotic twins are the completely identical. They are born from the fertilization of a single egg by a single sperm. After fertilization, the egg is divided into two identical cells and separated to form two separate embryos. It’s not enough to look at an ultrasound to see if there are one or two placentas and verify whether twins are identical or not, there may be several placentas or several amniotic cavities or not. This depends on when the division of the egg took place:

A twin DNA test or Zygosity test shows whether twins are identical or not.

Identical twins share almost all of their genetic heritage, including same sex and share many physical features that will develop with age, environmental factors and activities of each twin. Scientists have found the occurrence of some physical or biological differences between identical twins, although hey seem clones of a single egg. These differences such as different fingerprints or other biological constants are due to differences in the forming of identical genes. These are the so-called epigenetic phenomena.

Fraternal twins: The twins were born by fertilization of two eggs by two seeds. Fraternal twins do not have the same genetic heritage and not necessarily the same sex. They may look the same physically, but more like siblings from single pregnancies.

– When children do not have the same genetic heritage, twins are fraternal twins 100%.
– When the twins are mono-zygotic (children are identical twins), the twins test can confirm with a probability of up to 99.99%.

You can check paternity and maternity of biological twins at the same time while doing this test. Check with the laboratory before placing your order. Laboratories usually offer combined tests twins/parental that are more attractive financially than if you were to order both tests separately.