The results of a DNA tests are accurate up to 99.9% when the alleged parent can participate in the test. What is the process that makes DNA testing this reliable? Why can we not achieve 100% reliability for confirmation (inclusion) of paternity?

The reliability of parentage tests based on microsatellites comes from the statistical analysis of small regions of DNA. Remember that DNA is a molecule formed of sequences of four kinds of nucleotides: Adenine, Cytosine, Guanine and Thymine.

The genes have the function to encode the production of proteins, but there are portions of DNA not encoding for proteins.
It is these non-coding portions we call microsatellites or minisatellites.

These DNA regions are very different from one individual to another, which is why DNA paternity testing focuses on microsatellite analysis and DNA minisatellite. 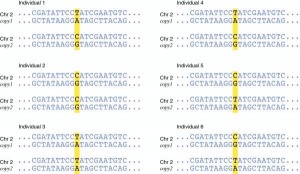 What is the difference between a microsatellite and minisatellite DNA?

– Microsatellites consist of short tandem repeat DNA sequences, repetitions of 4 nucleotides, but depending on the individual, the analysis may be focused on the sequences of five nucleotides. The abbreviation is generally used STR (Short Tandem Repeats).

The STR DNA test is to identify repeated sequences of regions (loci) and amplified by a polymerase chain reaction or PCR (abbreviation for Polymerase Chain Reaction). The fragments are then replicated, separated and measured. The bioinformatic analysis will then deduct the number of repetitions of each locus for each tested individual.

Why we can not achieve 100% reliability for a confirmation (inclusion) of paternity?

The result of a DNA paternity test is expressed as a statistic:

There are more than six billion nucleotide pairs in human DNA. For the probability of paternity is 100%, it would have proof that all of the child’s DNA sequence matches that of the alleged father. It is at this moment not possible to analyze all the genes of an individual, nor to compare them to those of a fully presumed father.

It may be possible in the near future to test all regions of DNA for paternity testing, given the current progress of research in bioinformatics. For now, in order to control the cost and time for paternity testing by DNA analysis, laboratories concentrate on a number of DNA regions (between 16 and 32 according to the relations of kinship and testing) and apply a statistical analysis of the specialized version of the alleles found in these DNA regions.

Why loci are very different from one individual to another?

Please do not confuse allele and locus.

– Locus in Latin means location, this is a region of DNA, it refers to a fixed location of each chromosome.
– The allele is the expression of a gene. For example the gene the detetermines your eye color.

DNA testing tries to determine the composition of an allele within a certain locus. DNA regions or loci are polymorphic; their composition is different as well as the number of repetitions. A 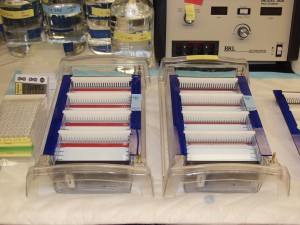 version of a locus can be found in 5-15% of individuals, which is why the DNA analysis shall cover at least 13 loci in order to identify an individual reliably. Serious laboratories are testing at least 16 loci for a paternity test.

The more of tested DNA regions, the greater the probability of paternity, particularly when the people tested are distant relatives. Although the probabilities depend on the rarity of the genetic heritage of those tested, we can safely say that: